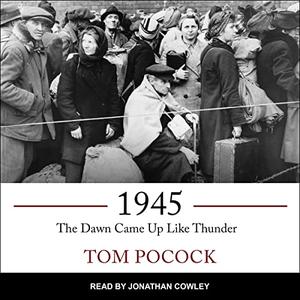 In 1945, Tom Pocock travelled widely and saw the final collapse of the German armies; the horror of concentration camps and destroyed cities; retribution reaching war criminals; and the unpredictable strangers from the east, the Red Army. In Berlin, he climbed through the ruins of Hitler’s Chancellery. In Vienna, he roistered with the Russians only to be arrested by them on a trip to Budapest. By the end of the year, he had paid his first visit to the El Dorado of that now distant world, New York, the glittering, happy, prosperous, democratic center of hopes and affections of the Western World.

Here indeed is the very form and pressure of the time: the awful stench of death and wholesale destruction; the casual murders and cruelties where over large tracts of territory law and order had collapsed; worst of all, the concentration camps still peopled by the ghosts of human beings, starved, tortured, terrified, and degraded.

Tom Pocock’s friends had served and died in the war from which he himself had been invalided, but when Hitler was defeated, he shared their feelings of exultation and relief. He was in London for VE Day and his account of it is not easily forgotten.