Baruch: My Own Story [Audiobook] 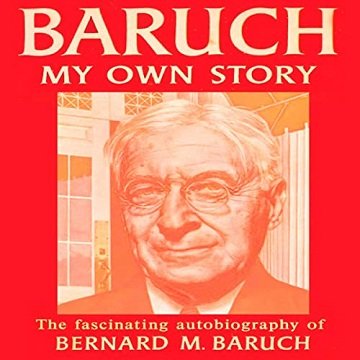 Bernard M. Baruch – one of the most remarkable men of our time – was an office boy at 19, a Wall Street partner at 25, and a millionaire before he was 35. For some men this success would mark the climax of a career; for Baruch it was only the beginning of a still greater one. In the 50 years since he made his first fortune, Bernard Baruch has been a trusted counselor of Presidents, an adviser on social and economic reforms, a statesman who has worked with two political parties and won the respect of both.
In this, the first volume of his memoirs, Mr. Baruch analyzes his personal philosophy and shows how it helped him solve the many problems that confronted him in his public life as chairman of the War Industries Board during World War I and as United States representative on the United Nations Atomic Energy Commission. Informal yet penetrating, intimate yet never losing sight of major events and issues, Baruch: My Own Story is infused with the remarkable personality of a truly distinguished American.