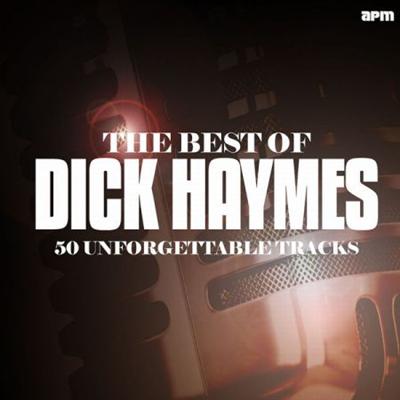 Dick Haymes was one of the most splendid ballad singers of his era, the near-equal of Crosby and Sinatra on classics of the form like "It Can’t Be Wrong," "Till the End of Time," and "It Might as Well Be Spring." Though he was unable to cash in during the ’50s golden era of adult pop (due to alcoholism, troubles with the government, and a few tempestuous relationships), Haymes continued performing and recording until his death in 1980. Born in Buenos Aires in 1918, Haymes was the son of British parents, who at the time were living on the cattle ranch they owned in Argentina. After they separated, he was reared by his mother in Paris before the Depression crippled their finances. He spent the rest of his formative years in the United States, where his mother performed as a singer. Haymes made his own professional debut at the age of 15, singing with a hotel band in New Jersey while on summer vacation. He left school in 1933 to move to Hollywood, and worked as a stuntman or extra on several films during the mid-’30s. After writing a few songs in 1939, he approached Harry James with hopes the bandleader would buy them; though James wasn’t very impressed with his songwriting skills, he hired Haymes one year later, to replace Frank Sinatra as his leading male singer. During 1941-1942, Dick Haymes recorded a few hits with James, including "A Sinner Kissed an Angel" and "The Devil Sat Down and Cried." (His biggest hit with James, "I’ll Get By (As Long as I Have You)," hit number one in 1944, three years after its recording.) Haymes also sang with Benny Goodman and Tommy Dorsey before signing to Decca in 1943. One of his first singles, "You’ll Never Know," hit number one in July 1943. Another, "It Can’t Be Wrong," was also a substantial hit at the same time. He moved from extra to starring roles in Hollywood, most notably appearing in 1945’s State Fair, and scored a Top Five hit with the Oscar-winning "It Might as Well Be Spring" from the film. Though he never again scored another number one hit, Haymes spent much of the mid-’40s near the top of the charts with the songs "Put Your Arms Around Me, Honey," "Laura," "Till the End of Time," and "That’s for Me." He also hosted a radio show with Helen Forrest, and starred in several more films after the success of State Fair. Though the hits continued until the end of the decade, both Haymes’ professional and personal life began to decline. He divorced his wife, actress Joanne Dru, began drinking heavily, and mishandled his finances. Many of his film appearances were panned and he was eventually dropped from his movie and recording contracts. A whirlwind romance and two-year marriage to Rita Hayworth hardly settled things down; when added to immigration and tax troubles, it made for a very obvious low point in the singer’s life. He began a professional comeback in 1955, thanks to a contract with Capitol Records, the foremost label for adult pop. Haymes recorded two LPs for Capitol, Rain or Shine and Moondreams, but continued to be plagued by alcoholism. After moving to Ireland in the early ’60s, Haymes finally kicked his drinking habit and returned to recording with 1969’s Now and Then, which alternated Haymes classics with more contemporary material. He moved back to America in the ’70s, performing numerous club dates and recording a live album at Cocoanut Grove. He last recorded in 1978, and lost his long bout with cancer two years later.