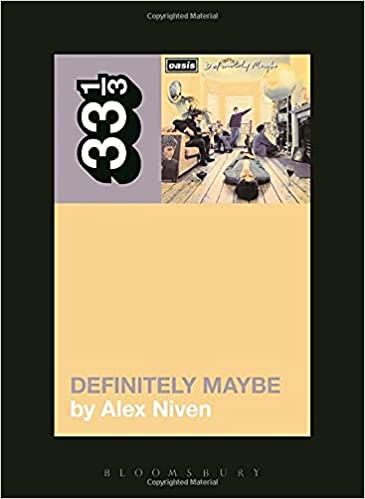 Oasis’s incendiary 1994 debut album Definitely Maybe managed to summarize almost the entire history of post-fifties guitar music from Chuck Berry to My Bloody Valentine in a way that seemed effortless. But this remarkable album was also a social document that came closer to narrating the collective hopes and dreams of a people than any other record of the last quarter century.

In a Britain that had just undergone the most damaging period of social upheaval in a century under the Thatcher government, Noel Gallagher ventriloquized slogans of burning communitarian optimism through the mouth of his brother Liam and the playing of the other Oasis ‘everymen’: Paul McGuigan, Paul Arthurs and Tony McCarroll. On , Oasis communicated a timeworn message of idealism and hope against the odds, but one that had special resonance in a society where the widening gap between high and low demanded a newly superhuman kind of leaping.

Alex Niven charts the astonishing rise of Oasis in the mid 1990s and celebrates the life-affirming, communal force of songs such as "Live Forever," "Supersonic," and "Cigarettes & Alcohol." In doing so, he seeks to reposition Oasis in relation to their Britpop peers and explore one of the most controversial pop-cultural narratives of the last thirty years.
Read more