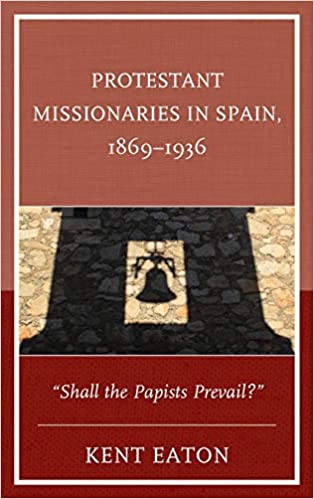 Protestant Missionaries in Spain, 1869-1936: “Shall the Papists Prevail?” examines the history of the Protestant denominations, especially the Plymouth Brethren, throughout Europe that attempted to bring their churches to Spain just prior to Spain’s First Republic (1873-1874) when religious liberty briefly existed. Protestant groups labored feverishly, establishing churches and schools designed to gain converts and thereby prove the supremacy of their theology in Spain as the foremost Roman Catholic country. Religious liberty was reintroduced in the 1930s during the Second Republic, but failed when General Francisco Franco won the Spanish Civil War and unified the culturally and linguistically diverse nation through the doctrine of religious uniformity.
Equally important is the question of why the Roman Catholic Church felt compelled to expel them from Spain. After the First Vatican Council (1869-1870), Spain became the battlefield between Protestants and Catholics, each vying to demonstrate their preeminence. Using primary sources from Spain and the UK, this book recreates the story of these missionaries’ struggles and examines their motivations for making significant sacrifices.