Roanoke: Solving the Mystery of the Lost Colony [Audiobook] 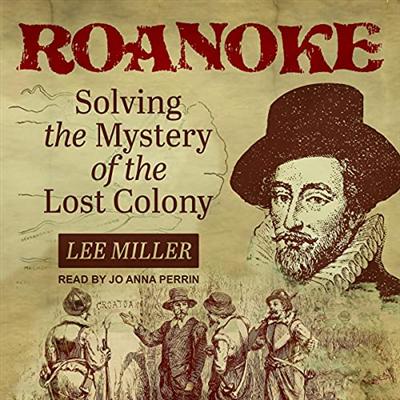 November 1587. A report reaches London that Sir Walter Raleigh’s expedition, which left England months before to land the first English settlers in America, has foundered. On Roanoke Island, off the coast of North Carolina, a tragedy is unfolding. Something has gone very wrong, and the colony – 115 men, women, and children, among them the first English child born in the New World, Virginia Dare – is in trouble. But there will be no rescue. Before help can reach them, all will vanish with barely a trace.
The Lost Colony is America’s oldest unsolved mystery. In this remarkable example of historical detective work, Lee Miller goes back to the original evidence and offers a fresh solution to the enduring legend. She establishes beyond doubt that the tragedy of the Lost Colony did not begin on the shores of Roanoke but within the walls of Westminster, in the inner circle of Queen Elizabeth’s government. As Miller detects, powerful men had reason to want Raleigh’s mission to fail. Furthermore, Miller shows what must have become of the settlers, left to face a hostile world that was itself suffering the upheavals of an alien invasion. Narrating a thrilling tale of court intrigue, spy rings, treachery, sabotage, Native American politics, and colonial power, Miller has finally shed light on a 400-year-old unsolved mystery.