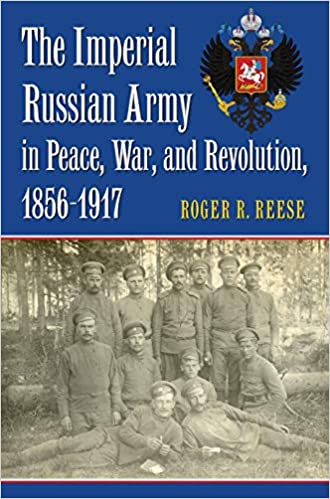 In December 1917, nine months after the disintegration of the Russian monarchy, the army officer corps, one of the dynasty’s prime pillars, finally fell-a collapse that, in light of World War I and the Bolshevik Revolution, historians often treat as inevitable. The Imperial Russian Army in Peace, War, and Revolution, 1856-1917 contests this assumption. By expanding our view of the Imperial Russian Army to include the experience of the enlisted ranks, Roger R. Reese reveals that the soldier’s revolt in 1917 was more social revolution than anti-war movement-and a revolution based on social distinctions within the officer corps as well as between the ranks.
Reese’s account begins in the aftermath of the Crimean War, when the emancipation of the serfs and consequent introduction of universal military service altered the composition of the officer corps as well as the relationship between officers and soldiers. More catalyst than cause, World War I exacerbated a pervasive discontent among soldiers at their ill treatment by officers, a condition that reached all the way back to the founding of the Russian army by Peter I. It was the officers’ refusal to change their behavior toward the soldiers and each other over a fifty-year period, Reese argues, capped by their attack on the Provisional Government in 1917, that fatally weakened the officer corps in advance of the Bolshevik seizure of power.
As he details the evolution of Russian Imperial Army over that period, Reese explains its concrete workings-from the conscription and discipline of soldiers to the recruitment and education of officers to the operation of unit economies, honor courts, and wartime reserves. Marshaling newly available materials, his book corrects distortions in both Soviet and Western views of the events of 1917 and adds welcome nuance and depth to our understanding of a critical turning point in Russian history.