The Wolves of Helmand: A View from Inside the Den of Modern War 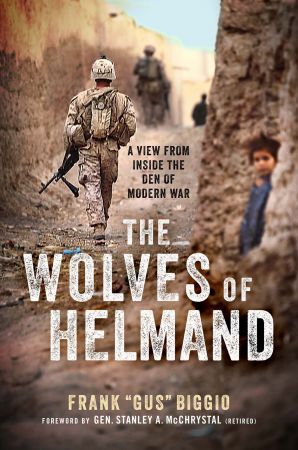 At turns poignant, funny, philosophical, and raw-but always real-The Wolves of Helmand is both a heartfelt homage to the Marine brotherhood with whom Biggio served and an expression of respect and love for the people of Afghanistan who ultimately trusted, shared, and appreciated their purpose.

Ten years after serving his country as a U.S. Marine, Captain Frank "Gus" Biggio signed up once again because he missed the brotherhood of the military. Leaving behind his budding law career, his young wife, and newborn son, he was deployed to Helmand Province-the most violent region in war-torn Afghanistan-for reasons few would likely understand before reading this book.

Riven by conflict and occupation for centuries because of its strategic location, the region he landed in what was, at that time, a hotbed of Taliban insurgency. As a participant in the landmark U.S.-led Operation Khanjar, Biggio and his fellow Marines were executing a new-era military strategy. Focused largely on empowerment of the local population, the offensive began with a troop surge designed to thwart the Taliban, but was more importantly followed by the restoration of the local government and real-time capacity building among the withdrawn and destitute Afghan people.

The Wolves of Helmand is unlike other war memoirs. It takes us less into the action-though there is that too-and more into the quiet places of today’s war zones. Yes, you’ll read of our Marines’ stealth arrival in a single night, our advanced weaponry, and our pop-up industrial village command centers. You’ll read, as well, about the ambushed patrols and the carnage of IEDs. But you will also read of the persistence, humility, ruggedness, loneliness, tedium, diplomacy, and humanity of our Marines’ jobs there, which more than anything else reveals the magnitude of even the smallest victories.

Completed years after the author’s return from his mission, The Wolves of Helmand is most of all a decade-long self-examination of a warrior’s heart, conscience, and memory. Whether intended or not, Biggio’s deep reflections and innate honesty answer every question you’ve ever wanted to ask about life and death in war-and even questions you probably never thought to ask.

What calls a warrior to duty?

What makes, sustains, plagues, and even breaks a warrior?

These are bigger questions than the ones impolite society pokes around when a veteran returns home-Did you kill anyone? Did you have to go? Why would you fight for another country? Why were we even there?

Yet the answers to those queries are here, too, in this thoughtful memoir that will make you think about war, family, love, and loss.