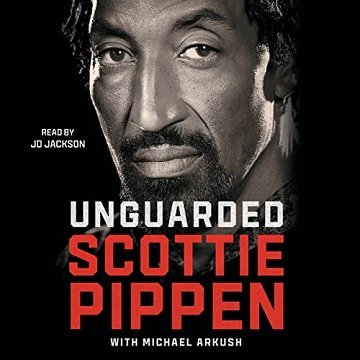 An unflinching memoir from the six-time NBA Champion, two-time Olympic gold medalist, and Hall of Famer – revealing how Scottie Pippen, the youngest of 12, overcame two family tragedies and universal disregard by college scouts to become an essential component of the greatest basketball dynasty of the last 50 years. Scottie Pippen has been called one of the greatest NBA players for good reason. Simply put, without Pippen, there are no championship banners – let alone six – hanging from the United Center rafters. There’s no Last Dance documentary. There’s no “Michael Jordan” as we know him. The 1990s Chicago Bulls teams would not exist as we know them.
In Unguarded, the six-time champion and two-time Olympic gold medalist finally opens up to offer pointed and transparent takes on Michael Jordan, Phil Jackson, and Dennis Rodman, among others. Pippen details how he cringed at being labeled Jordan’s sidekick, and discusses how he could have (and should have) received more respect from the Bulls’ management and the media. On the 30th anniversary of the Bulls’ first championship, Pippen is finally giving millions of adoring basketball fans what they crave; a raw, unvarnished look into his life, and role within one of the greatest, most popular teams of all time.