Vlad III Dracula: The Life and Times of the Historical Dracula [Audiobook] 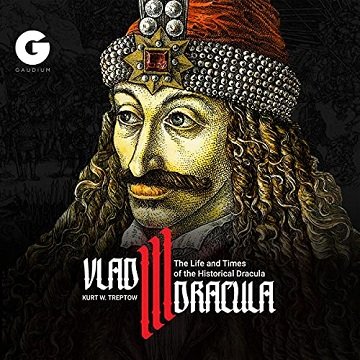 The 15th century Romanian Prince Vlad III Dracula, also known as Vlad the Impaler, is one of the most fascinating personalities of medieval history. Already during his own lifetime, his true story became obscured by a veil of myths. As a result, he has been portrayed both as a bloody tyrant – who degenerated down throughout the centuries into the fictional vampire of the same name created by Bram Stoker at the end of the 19th century – and as a national and Christian hero who bravely fought to defend his native land and all of Europe against the invading Turkish infidels. Even in more recent historiography, the true history of Dracula has been obscured by Communist and nationalist historiography.
This revised second edition of the book widely considered to be the most serious comprehensive study of the historical Dracula, presents the life and times of this remarkable figure of medieval Europe. The author uses all extant Romanian, Turkish, Russian, and German sources to reconstruct the history of this famous prince who, despite his short reign, created a name for himself in the history of his own country, as well as in world history. This audiobook studies the life and times of Vlad III Dracula, also known as Vlad the Impaler, providing the listener with a better understanding of the personality of this enigmatic figure of medieval history, as well as the times in which he lived. The author also discusses the development of the Dracula myth. Translations of key documents concerning the history of Vlad III Dracula are included in the appendixes.