Volunteers: Growing Up in the Forever War [Audiobook] 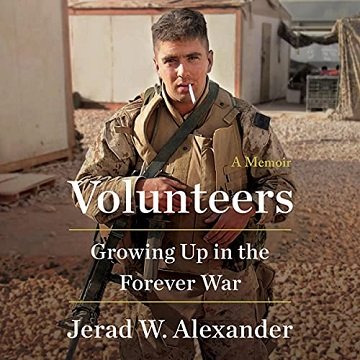 Riveting and morally complex, Volunteers is not only an insider’s account of war. It takes you inside the increasingly closed culture that creates our warriors. As a child, Jerad Alexander lay in bed listening to the fighter jets take off outside his window and was desperate to be airborne. As a teenager at an American base in Japan, he immersed himself in war games, war movies, and pulpy novels about Vietnam. Obsessed with all things military, he grew up playing with guns, joined the Civil Air Patrol for the uniform, and reveled in the closed and safe life “inside the castle,” within the embrace of the armed forces, the only world he knew or could imagine.
Most of all, he dreamed of enlisting-like his mother, father, stepfather, and grandfather before him-and playing his part in the Great American War Story. He joined the US Marines straight out of high school, eager for action. Once in Iraq, however, he came to realize he was fighting a lost cause, enmeshed in the ongoing War on Terror that was really just a fruitless display of American might. The myths of war, the stories of violence and masculinity and heroism, the legacy of his family-everything Alexander had planned his life around-was a mirage. Alternating scenes from childhood with skirmishes in the Iraqi desert, this original, searing, and propulsive memoir introduces a powerful new voice in the literature of war. Jerad W. Alexander-not some elite warrior, but a simple volunteer-delivers a passionate and timely reckoning with the troubled and cyclical truths of the American war machine.