Hindutva Regime in Assam: Saffron in the Rainbow 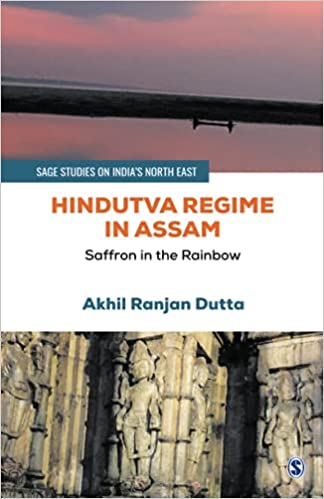 Hindutva Regime in Assam: Saffron in the Rainbow analyses the Bharatiya Janata Party’s (BJP) strategy of appropriating cultural resources in Assam while pursuing the Hindutva agenda. In Assam, where numerous ethnic and regional political outfits have registered their electoral presence, the ‘Rainbow Alliance’ emerged as the dominant strategic tool for BJP in its electoral battles. The book studies how BJP has capitalized on people’s attachment to their ethno-regional cultures and has successfully co-opted and ‘saffronized’ the ‘Rainbow’ by bringing together diverse ethnic groups into its fold. Scrutinizing electoral strategies, BJP’s victories in 2014, 2016 and 2019, and the efforts towards dismantling consensus around the National Register of Citizens (NRC) by enacting the Citizenship Amendment Act (CAA), the book provides a holistic view of this steady ‘saffronization’. It also critically investigates BJP’s populist development agenda.

From the Rashtriya Swayamsevak Sangh’s (RSS) grassroots work to the government’s policy initiatives, the book analyses the regime’s performance and ideological pursuits in depth. It highlights how BJP’s strategies in Assam are unique in some ways and how similar strategies can be seen elsewhere in India.