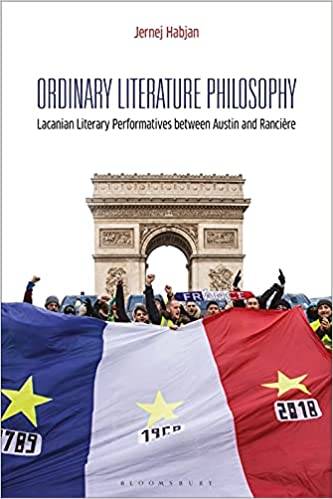 The first extended Lacanian reading of J. L. Austin’s ordinary language philosophy, this book examines how it has been received in the continental tradition by Jacques Derrida and Judith Butler, Jacques Rancière and Oswald Ducrot. This is a tradition that neglects Austin’s general speech act theory on behalf of his special theory of the performative, whilst bringing a new attention to the literary and the aesthetic.

The book charts each of these theoretical interactions with a Lacanian reading of the thinker through a case study. Austin, Derrida and Butler are respectively read with a Hollywood blockbuster, a Shakespearean bestseller and a globally influential May ’68 poster – texts preoccupied with the problem of subjectivity in early, high and postmodernity. Hence Austin’s constatives (nonperformative statements) are explored with Dead Poets Society; Derridean naming with Romeo and Juliet; and Butlerian aesthetic re-enactment with We Are all German Jews. Finally, Rancière and Ducrot enable a return to Austin beyond his continental reception. Austin is valorised with a theory as attractive, and as irreducible, to the continental tradition as his own thought, namely Jacques Lacan’s theory of the signifier.

Drawing together some of the giants of language theory, psychoanalysis and poststructuralist thought, Habjan offers a new materialist reading of the ‘ordinary’ status of literary language and a vital contribution to current debates within literary studies and contemporary philosophy.